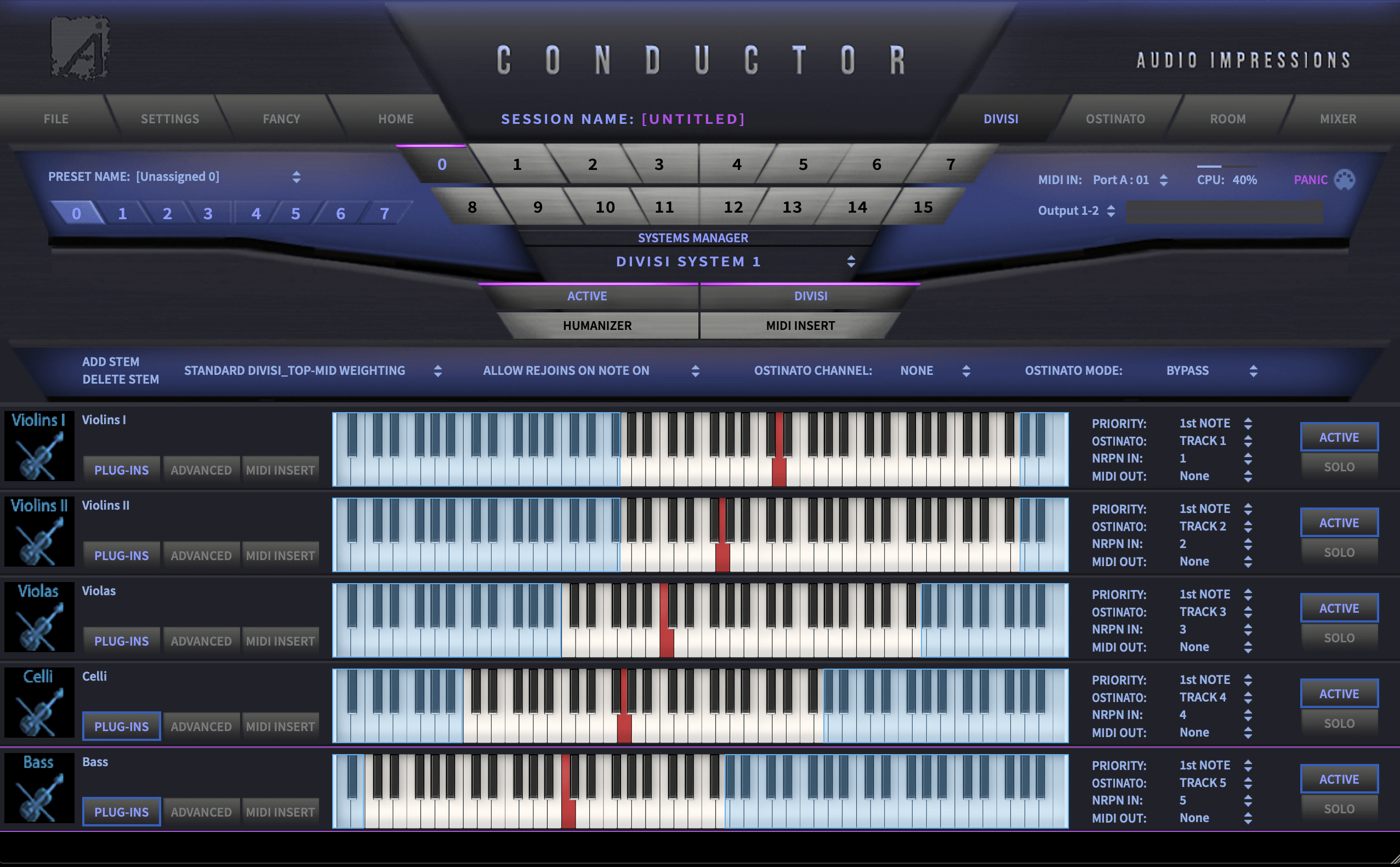 Conductor is the framework where our patented processes interface. Conductor includes Divisi, The Room, Ostinato, Controllers and a Mixer.

Adjust the static audio output levels of your virtual instruments on the Mixer Page. You may also enable the ROOM button on each slider panel to create a new ball location on The Room’s virtual floor. Use our dial on the right, to raise or lower the sliders collectively without interfering with your relative mix. 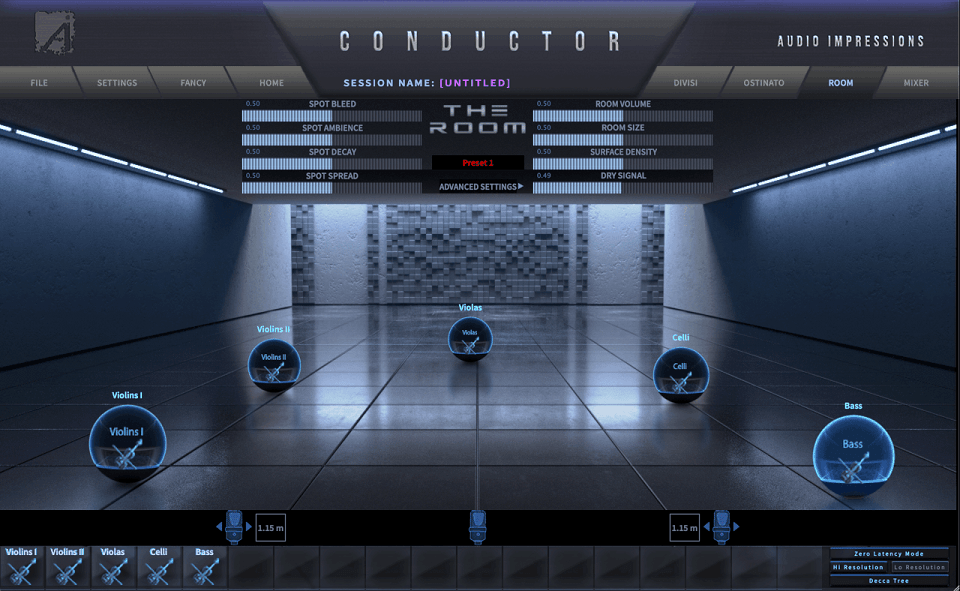 Our patented microphone bleed simulator that recreates the interaction of multiple microphones (Spot Mics) during a recording session. The Room also recreates the separate room mics (Decca Tree) that capture the overall ensemble from a conductor’s perspective.

In addition to composing with virtual instruments, composers often overdub vocals and other solo instruments in their home studios. However, recording discrete instruments in a small recording room results in an unnatural “overdub” sound. The Room also packaged as a separate DAW plug-in for composers, musicians, and engineers wishing to recreate the sonic signature of a live ensemble recording environment with The Room.

In live ensemble recordings, each musician or group of musicians has a spot microphone closely in front of them. When the ensemble performs together, the sound of each instrument bleeds, in varying degree, into the mics of the other musicians. The farther apart the spot mics, the less mic bleed and proximity effect. The Room’s “Spot Mic Process” simulates this effect. 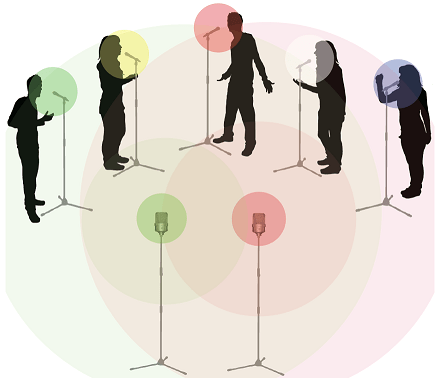 In addition to the various spot mics, it is also common to record the room sound with two or more room microphones placed at a moderate distance from the conductor’s perspective. The Room’s “Room Mic Process” also simulates the “Decca Tree” effect. 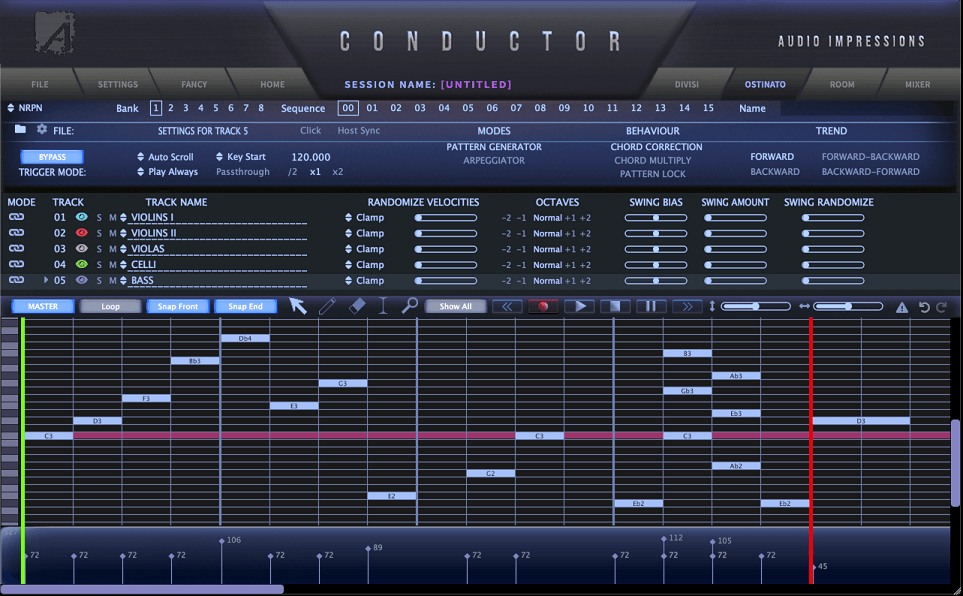 Our built-in MIDI Sequencer/Pattern Generator/Arpeggiator. It’s a companion to the Divisi page, because each Divisi System automatically has its own companion Ostinato instance, and each Divisi Stem has its own Ostinato Track. Ostinato tracks can be set with completely different patterns and behavior modes, or you can have one track that affects all Divisi stems simultaneously.

Cross-blend up to 8 different MIDI plug-in instruments’ audio outputs, in real time, using the Joysticks panel control ball. The ball movements can also be captured and played back from your DAW track automation lanes.

Divisi allows string instrument sections to create an ideal sound-power balance. Since string instruments can’t play chords, each pitch of the chord must be distributed among players in the section.

When a single pitch is written, then all violins play the same pitch

In a three-note chord, Violins I plays the top pitch while Violins II split (Divisi) into an “A” Section playing the middle pitch and a “B” Section playing the bottom pitch. To preserve the melody, the top pitch always has the highest number of players. Ai's Divisi process calls this “Top Weighting.” Conversely, “Bottom Weighting” is best for the Basses when in Divisi, to preserve the lowest bass pitch (Fundamental pitch) of the chord.

A little-known practice outside of the string player community is called Soft-Attack Rejoins: When pitches of the chord are released, the players re-join with the remaining held pitches. String players naturally perform a fade-in on the re-join pitch. If they re-joined at full intensity, it would sound like an unwritten secondary attack.

Our Standard Divisi process can also be used to Divisi the entire string section, or any combination of instrument types.

Standard Divisi also incorporates our Humanize function which provides glissando and slurs, and more, for all virtual instruments. Playing a single note in Regular Divisi uses the same number of digital audio voices as there are instruments in the Divisi System all the time, thus the sound power balance remains the same, whether it is a single note or a full chord.

Our String Instrument Divisi process allows virtual string instruments to distribute the pitches of a chord across each individual string. This allows for proper chord voicing when played on a MIDI keyboard and provides a path for our pattern generator, “Ostinato” to generate realistic sounding guitar stums. It also allows future virtual string instrument libraries to have real-time control over which string plays a given passage. 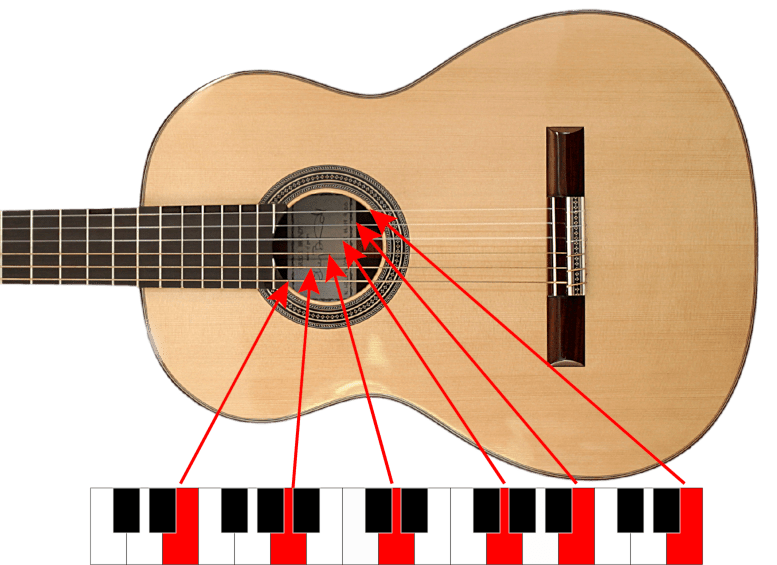